Posted by Edith Cook on Sunday, November 27, 2011 Under: Personal 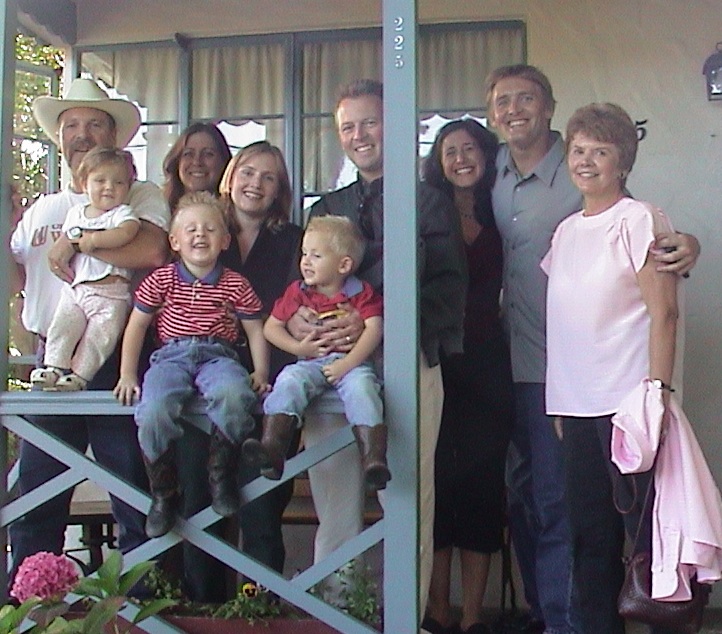 A family member emails that my writing is "crap" and that she will refuse to read my WTE feeds from now on. Since all along she has had the option of deleting my stuff unread, I stop to wonder over the urge to insult me. Name-calling is really a short-cut version of blaming. The speaker refuses to look at her own thoughts, feelings, and motivations and focuses instead on the "faults" of the other.

Relationships are a lot of work. We have to get ourselves to overcome--to forgive--not only the small slights but also (and more seriously) the big hurts that others inflict on us. And that's not the worst of it. More challenging by far is to help those around us to forgive us for the small sights and the big hurts we inflict on them. The photo above is of my grown sons and their families, with me at the outer edge, a few months after Darold's death. No one would deny that back then ours hardly qualified as your run-of-the-mill "happy family." Today I wonder if the happy-family idiom has not been a myth all along.

In the early days of humanity, family, clans, tribes, and eventually nations, stuck it out together because of the advantage of greater numbers in face-downs with predators or in battles with human groups competing for the same resources who came determined to drive off the earlier arrivals. Language itself developed into the complex forms we know today only as groups evolved into societies that necessitated an accounting and distribution system of the resources at hand: food, water, shelter. Our hunter/gatherer ancestors had less need to communicate than later societies. In other words, language is an acquired behavioral trait.

Our animal cousins can shed a bit of light on this development. Dr. Con Slobochikoff at Northern Arizona University found that prairie dogs are our cousins in language: they have evolved a communication system that rivals our own. These charismatic, rabbit-size rodents live on prairies and open grasslands (in only a fraction of their former numbers). Since their "towns" exist for hundreds of years, they are well known to local predators; hence, the rodents have developed sophisticated linguistics to identify their enemies.

North America's prairie dogs live in underground burrows, extensive warrens of tunnels and chambers marked by many mounds of packed earth at their surface entrances. Burrows have defined nurseries, sleeping quarters, and even toilets. They also feature listening posts near exits, so animals can safely keep tabs on the movements of predators outside. Prairie dogs spend a lot of time building and rebuilding these dwellings. Family groups (a male, a few females, and their young) inhabit burrows and cooperate to share food, chase off other prairie dogs, and groom one another. The group members even greet one another with a prairie dog kiss or nuzzle. Young pups are very playful and can often been seen romping near their burrows.

Slobochikoff studied the evolution of social behavior as concerns the availability of resources. He found the Gunnison prairie dogs the model species for his investigation, as social and colonial as they are. Within a colony, there are a number of territories, with each territory containing one of the following social assemblages: a) one adult of either sex; b) a male and a female adult, in an apparently monogamous association; c) one male and several females, in an apparently polygynous association; d) one female and several males, in an apparently polyandrous association; e) several males and several females, in a multi-animal association. DNA fingerprinting studies have shown that these associations do not reflect actual mating assemblages: over 60 percent of the matings by females occur with males from other territories. The social assemblages exist for reasons other than mating, perhaps to take advantage of limited resources.

What does the research have to do with my young family-member's feud? I am trying to come to terms with the dispiriting facts of the inevitable strife that exists within family human groups, if not prairie-dog families.