Posted by Edith Cook on Sunday, October 2, 2011 Under: Reading Life 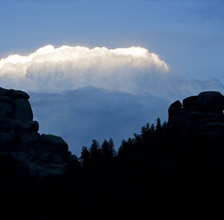 It's lovely to visit the mountains. But do you want to live there? I thought I did.

Laramie and Cheyenne have been touted as small cities that are good places to retire. What the retirement literature doesn’t say: these cities lie at or above 6000 feet elevation. If you have lived at sea level all your life—say you retire from the fast lanes of San Francisco or Chicago—altitude will be a problem. As we age, our bodies do not acclimate as they did in youth. Someone born at altitude or who moves there while young may not be troubled by hypoxia, the condition that signals insufficient oxygen in the body, but if you move from San Francisco to Cheyenne after a lifetime of low-level existence, will discover problems as time goes on.

For someone transplanted from low-level to high-altitude conditions, a treatment of oxygen enrichment can counteract the effects of hypoxia. By increasing the concentration of oxygen in the air, the effects of lower barometric pressure are countered and the level of oxygen in the arteries is restored to normal capacity. Sometimes a small amount of supplemental oxygen can increase productivity, improve sleep, and diminish fatigue.

I had lived in Cheyenne for eighteen months when insomnia, fatigue, and “feeling rotten” became unbearable. Strangely, the physicians I consulted did not even raise the possibility of hypoxia. Instead, they focused on a heart murmur that, I was told years ago by a Tennessee cardiologist, was “nothing to worry about.” In Cheyenne I underwent all sorts of tests and diagnoses, fifteen month in all, every one of them pointing to the need for heart surgery. It’s only when I was tested at a clinic that, fortuitously, lay at sea level, that the mystery was solved: there, I functioned fine. All my symptoms disappeared. Eventually I was diagnosed with “nighttime desaturation” of less than 90 percent.

I now use a concentrator at night, a machine that corrects the deoxygenation as I sleep. It’s not the perfect solution—for one thing, the change has done little to diminish the insomnia that plagues me. I also hate the feeling of being tied to a quasi umbilical cord. Not to mention the machine’s terrific racket; I have to put it in another room and close two doors in between to make the noise tolerable. For the time being, it serves. Family obligations are the reasons I live here, and I make do. But if you have lived at sea level all your life and have the choice, don’t let rainbow-painters cause you to opt for retiring at altitude.