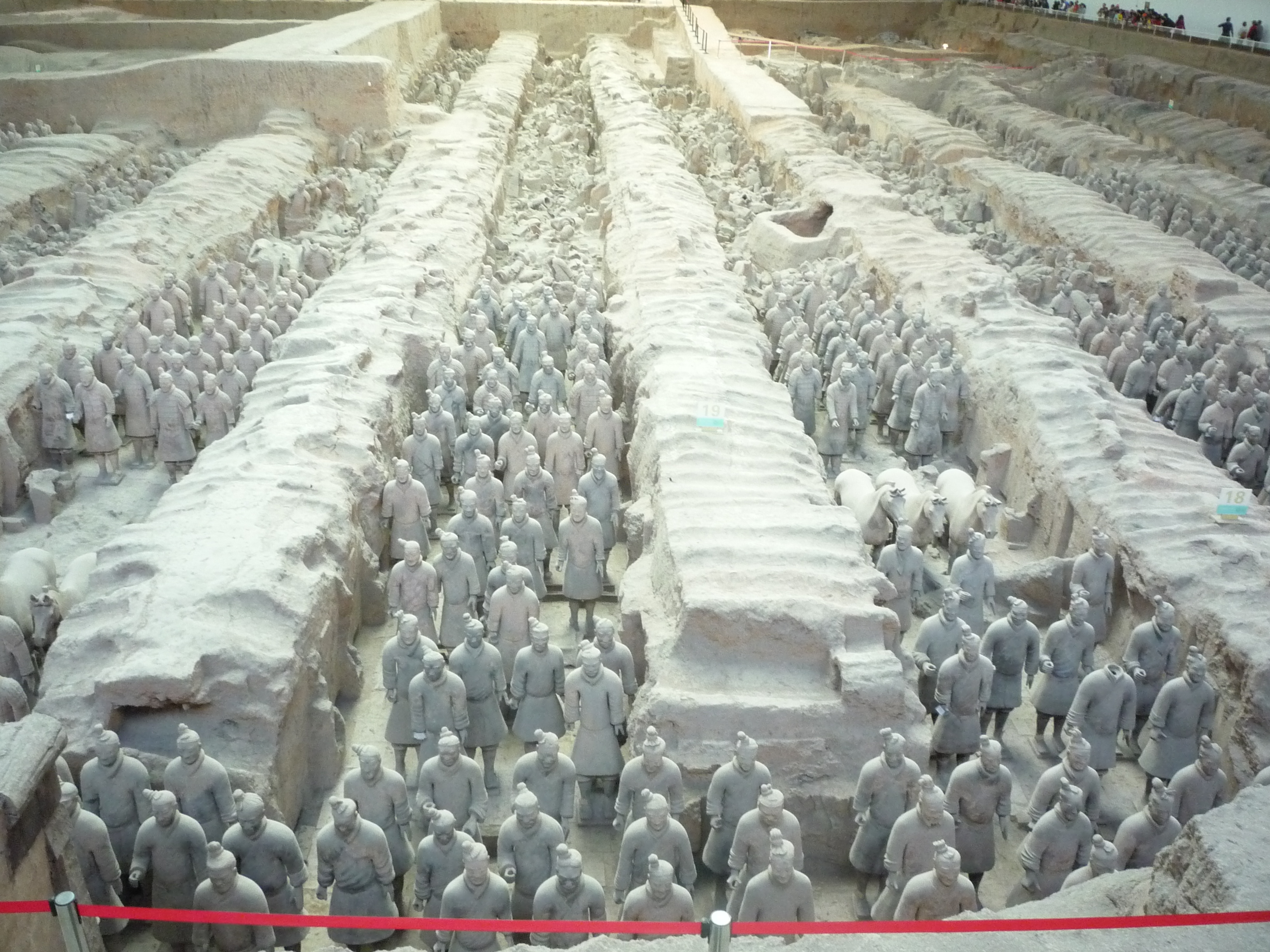 Googles is a problem in China. I only just now figured out, if I reply to someone's email, it has a better chance of arriving.

We are in Xi'an, a touristy city famous for an 11th cent. emperor's terra cotta army that accompanied him to his grave. Today it is "the world's largest underground military museum."

We are staying in a four-star hotel. It has no closet or drawer space for clothes, only four wood-mounted clothes hooks with a few hangers. The toilet paper is stingy, and the tissue are packaged; you'll be charged extra if you use them. Yesterday we were at a fancy restaurant where, when we asked for napkins, we were told we'd have to pay extra to get them.

In the hotel room, the shower is not separated from the rest of the bathroom, so everything gets wet when you shower. On the counter sits a box with items marked "non-free" that include a "vibration ring," a "men sex oil," packages of men's and women's "wash sanitary lotion," along with a razor and shaving cream marked "for men." Quite an array.

On the "kitchen" counter is a hot-water carafe and an assortment of teas that are not free. No coffee anywhere, not even a packet of instant. Yesterday when walking with my friends I spotted a Starbucks; have plans to take my caffeine-starved body hither sometime today. After a week of green-tea fare, it'll e nice. (My Japanese friends drink coffee in the morning and tea in the afternoon.)

We had taken an overnight train to get here. The train seemed modern but its "toilet" was ghastly: a tiny cement cubicle with a hole over which to squat, the cement floor splattered with urine.

Xi'an lies on a more southerly latitude than Beijing, roughly in line with Shanghai but inland. Where Shanghai was muggy, Xi'an has a mild, dry climate--at least for now. It may get hot in the summer. Crowds of tourists everywhere, even on an April Monday that followed a national three-day holiday.

I've been drinking boiled water or tea. The kitchen in my friend's Beijing apartment is ancient, so is its bathroom. Heat was government-turned-off on March 15. Qi pays $850/month on rent for this tiny one-bedroom joint; she tells me to buy the apartment would cost 500 thou. She travels quite a bit for her company--to Taiwan, South Korea, and Holland. She describes her company at international and her position as manager.

To take five days off from work for the visit to Xi'an, she had to work Sat & Sun, plus took her laptop to do emails and her work cell phone for calls. I guess, considering the unheated apartment, she'd rather be at work on weekends. Her parents do all the cooking and washing, etc. Their bed is in the "living room."

Xi'an is an 11-hour train ride from Beijing. We travelled by night train, in rather disconcerting sleeping arrangements.

Xi'an is an incredible tourist trap. In opulence, and in electricity- and water-wasting, it tops everything American, Las Vegas to Phoenix, all for the sake of the almighty dollar. Hawkers accost you everywhere, selling everything from opal bracelets (there are a big opal and marble mining pits nearby) to replica terra cotta warriors to panda bear toys. There's constant yelling, the hawking of wares, while  annoyingly loud canned music seeps from every restaurant, including Papa John's and KFC. Some of the music is traditional Chinese, but most is sentimental Western pop. Amid the hawkers are beggars and panhandlers.

On the other hand, to get toilet paper at the hotel practically needs a petition to the head of state. More disconcerting yet, people smoke everywhere. They also spit liberally on sidewalks, even inside  public-transportation busses.

It's culturally acceptable (even mandatory) to make a lot of noise while eating. Slurping noodles, masticating with mouth open, etc. Luckily, I'd had a preview of this with my friend in the U.S. I recall alerting her--in vain, it seemed--that making eating noises is considered impolite. My Japanese friends were the ones who explained the cultural differences--in Japan, too, you are supposed to slurp your noodles as signs of enjoying the food.

Actually, that's a good thing for me, since I'm still not very good with chopsticks. Suffice to say, I haven't been eating terribly vigorously here. 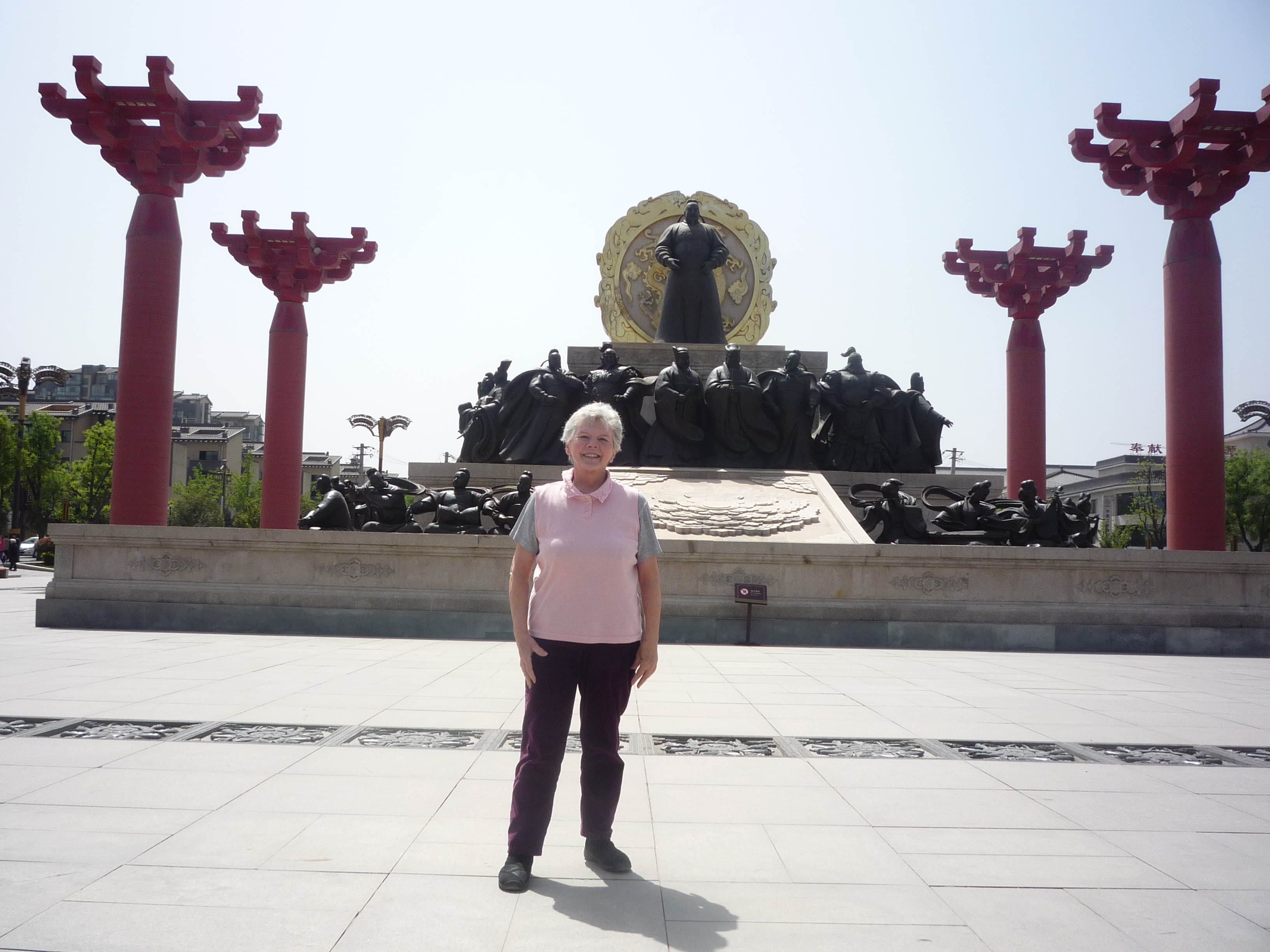