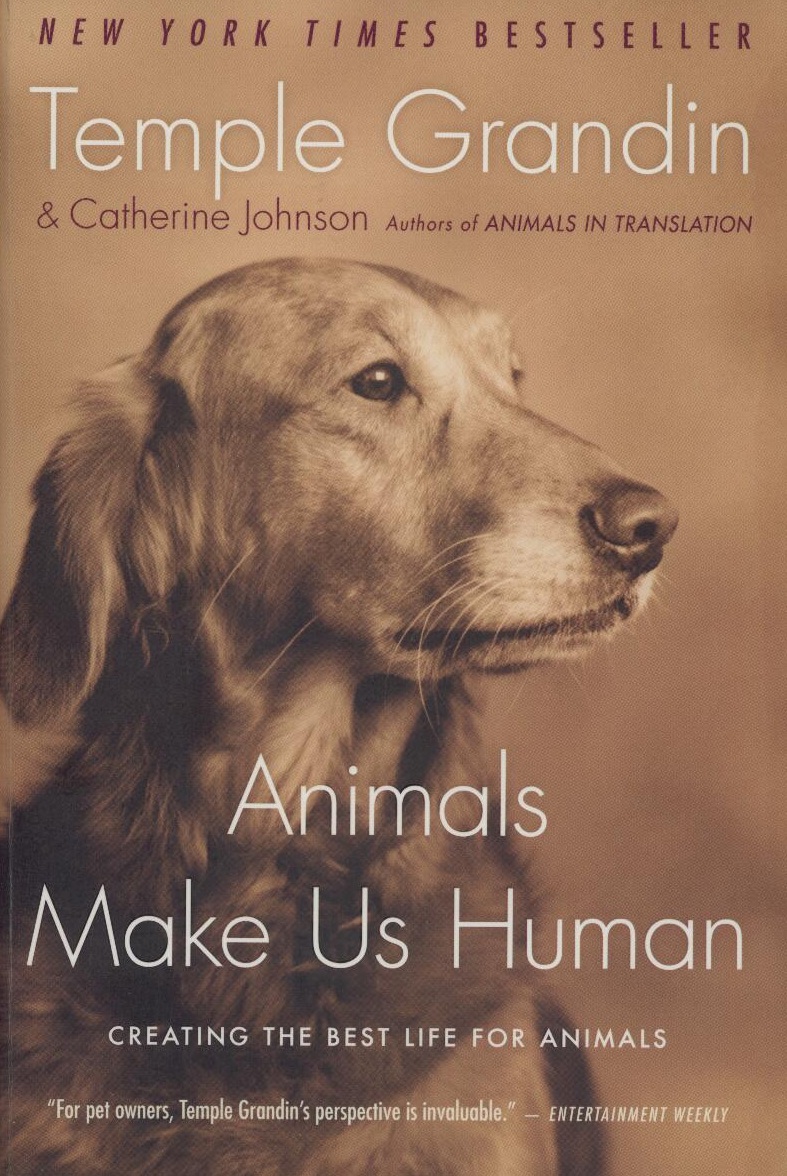 In our quest to become fully human, we need close involvement with animals, asserts Temple Grandin. Where Frans de Waal reminds us of our affinity with the hierarchy-enhancing chimps and the hierarchy-attenuating bonobos, Grandin shows that we have much in common with wolves, who live and hunt in family units where dominance is largely absent. Dogs evolved from their ancestors, the wolves, she reminds us, adding that dogs in their association with humans have suffered a kind of arrested development: their emotion and intelligence is akin to that of adolescent wolves. Their human owners, rather than establishing themselves as "alpha," may consider themselves the parent figures to their dogs.

Animals Make Us Human does more, much more, than educate us about our doggie companions. Grandin cites research that documents that the animals around us, including those raised for slaughter, are creatures with emotions akin to human feeling. “When people are suffering mentally, they want to feel better—they want to stop having bad emotions and start having good emotions,” she writes, explaining that animals are similarly motivated. Research shows that animals and people have the same core emotion systems in the brain.

Grandin urges us to take animal welfare seriously, not only for our pets and the creatures we visit in the zoo but also for the creatures whose body parts and body products we consume. We buy eggs, chicken breasts, milk, ground beef—and we don’t ask how the stuff got to the refrigerated shelves in the supermarket, much less do we give any thought to the kind of lives these animals lead while they yet live. Grandin does, and she wants us to start paying attention. She asks, she investigates, she cares—and she urges us to know and to care. A hen has to have a place to hide when she lays eggs, Grandin says, because that’s what makes her feel safe. The barn of a commercial farm where no fox can ever enter may seem “safe” from the human perspective, but not from a hen’s. At a commercial farm a hen often has not enough space to turn around, stand upright, or stretch her wigs, let alone find a dark place to hide when it comes to egg-laying. Often her cage has no more floor space than the size or a regular business letter. Such lack of room will trigger fear and rage in the hen, which she is helpless to ameliorate. Are we willing to consume eggs produced with such deprivation?

“What does an animal need to have a good life?” The question has preoccupied Grandin since she studied under Bill Greenough, a pioneer in research in the 1970s on the influence of the enriched environment on animal emotion. Thirty-five years later, Grandin is a professor at Colorado State University and the leading authority on animal welfare. She is careful to distinguish her goals from those of animal activists.

Animals Make Us Human was preceded by her best-selling Animals in Translation, a book that details her experience as advisor to managers of meat packaging plants, that is to say, slaughterhouses. Both books examine the conditions under which pigs, sheep, and cattle are kept confined or processed for slaughter; often their fates are as dismal as those of laying hens. To create good living conditions for any animal, whether a captive in a zoo, a meat-producer on a farm, or a family’s beloved pet, we must base animal welfare programs on the core emotions of the brain, she says, going on to explain the “blue ribbon emotions” of animals. Adducing animal needs from behavior alone is not sufficient because prey animals such as cattle and sheep hide their pain so that a predator cannot detect their weakness. However, when animals exhibit the compulsive, self-injurious behavior of “stereotypy,” Grandin knows things are seriously wrong. Agri-Food Canada estimates that, worldwide, over 85 million farm, laboratory, and zoo animals and pets are afflicted with the disorder. Gradin is determined that we alleviate the conditions that give rise to stereotypy. In Animals in Translation Grandin explains that she has been working with KFC (Kentucky Fried Chicken) to raise standards in the poultry industry. “The lights have to be off [at night] because darkness slows down a baby chick’s growth. Today’s poultry chicken has been bred to grow so rapidly that its legs can collapse under the weight of its ballooning body . . .  lameness is a severe problem in chicken welfare. I’ve been to farms where half of the chickens are lame.”

What is amazing about Temple Grandin is that she is severely autistic. Like animals do, she too thinks in pictures, she often reminds us. The emotions she so eloquently describes in animals are accessible to her person only through rigorous intellectual activity. I will have more to say about this in next week’s blog.

Tags: "temple grandin" "lives of animals" "autism"
« Back to posts