Horse Boy and Other Life Stories

Posted by Edith Cook on Friday, June 3, 2011 Under: Reading Life 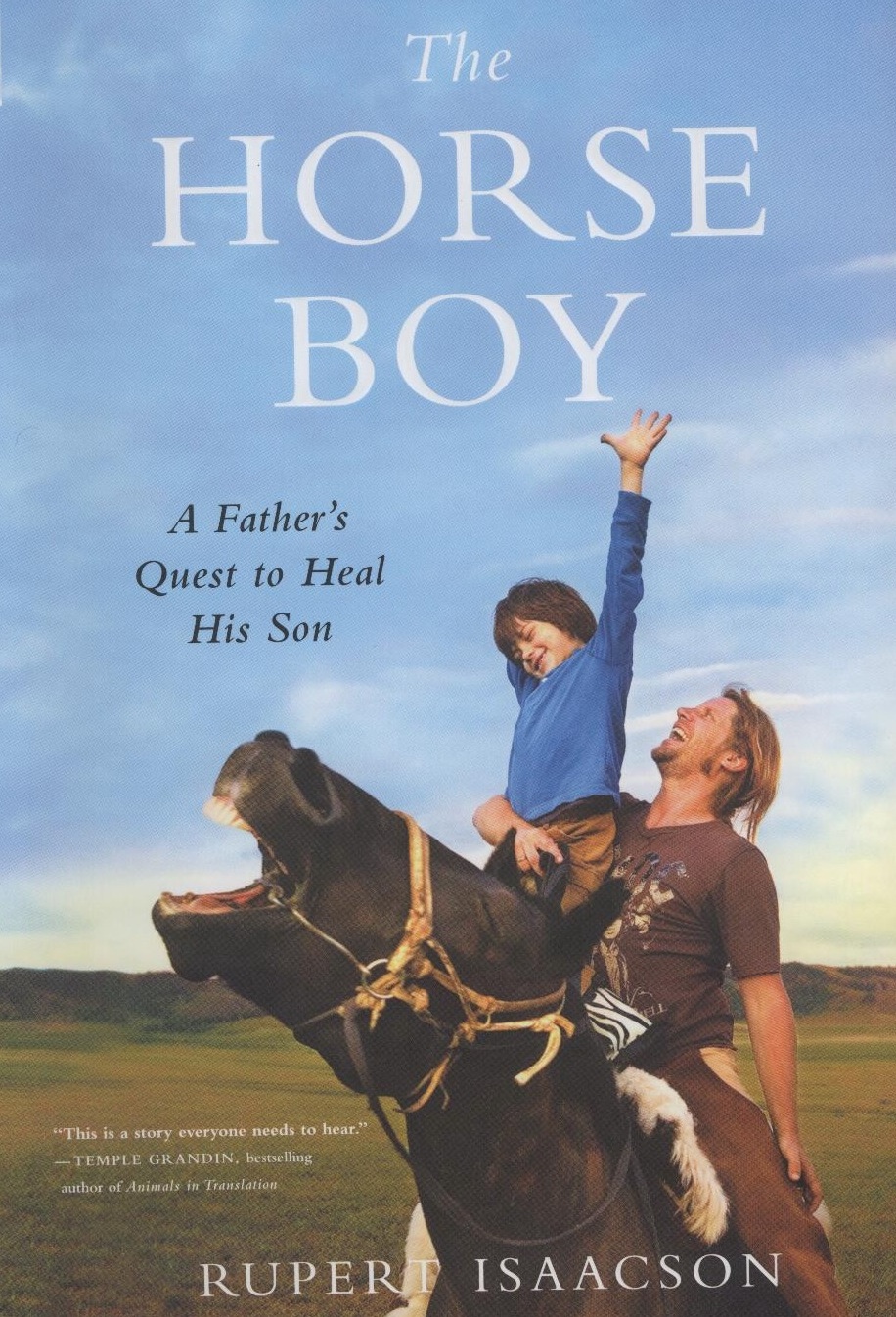 When I grew up in postwar Germany, no animals existed in our home. For a short while, when I was eleven, we owned a dog, a nervous, yippy little fellow who was soon gone. My parents claimed he developed rabies and they got someone to kill him. I never believed the rabies story. A few years earlier, soon after my dad's return as prisoner of war from Soviet Russia, my mother raised a few geese, partly for canning the meat, partly for immediate consumption. She nailed their webbed feet onto posts so the unfortunate birds could not move, much less escape. Then she force-fed them-for fatty livers, I suppose, or for fat geese. An atrocious practice though widely used then, perhaps still used in France to produce the prized fois gras. My dad came from a farming family, and today I wonder over his indifference to animals.

I married an American and lived in California. Darold, too, came from a "no-animals-in our house" family, but he got to spend a couple of summers, after his recovery from polio, on an uncle's farm. In time we owned a succession of dogs. Then we moved into a modest house in the country, and a client of Darold's, wealthy if chronically inebriated, decided to donate his Shetland pony to our boys, six and four years of age, with baby brother a few months old. "A boy must have a pony," the drunken client hollered as he pulled into our driveway with his horse trailer. He even had a child's saddle to go with the Shetland. Trouble was, the pony had been mistreated-its owner, to entertain his cronies, used to put a pet monkey into the saddle on its back. "Duke" was a terror to ride; luckily, we found a good trainer for pony and boys and in time the Shetland became manageable. We moved on to Welsh ponies, then to horses. Soon the boys owned a handful of cows and sheep, even a sow that gave birth to piglets. They showed off their various critters in 4H shows and, later, in FFA. When Temple Grandin says that animals make us human, I know what she's talking about.

Rupert Isaacson discovered his son was autistic, and he observed that Rowan "seemed to have a direct line" to animals. He himself had similar attachments as a youngster. "Like Rowan, I had the affinity," he says, indicating a link to horses. He goes on to explain that at age twelve he had a nervous breakdown, the result of "bullying at school and unhappiness at home." A bedridden three months of uncontrollable crying followed. "Finally my parents asked what would get me back on my feet. The answer came immediately. I wanted to ride." His parents stipulated he must earn the money to purchase a horse, and he did. From then on he spent weekends at the farm of an irritable old aunt outside of London. The horse came to the aunt's farm and a young woman taught him to ride. Horses have been "my savior, my passion, my dream-my life, in fact," writes Isaakson in The Horse Boy. He trained other people's horses to earn his own horse's keep. Then he became a travel writer. He married, settled in Texas, fathered Rowan-and became convinced he could provide his son something of a healing experience through horses. A kindly neighbor lent his horse Betsy to the project. Eventually Isaacson, his wife, and their son would undertake an epic journey to seek unconventional help for Rowan. Before they did this, they consulted with Temple Grandin, this country's best-known autist, who is intensely involved in animal welfare but also tirelessly promotes awareness of the emotional and sensory aspects of autism. More recently Isaacson established an equine therapy center, New Trails Farm, "where autistic and neurotypical kids can come together for learning and therapies." I think in the Horse Boy process he has healed himself. The authors of Born for Love mention an equine farm in Belgium for autistic individuals, and they note in passing that "both Einstein and Newton showed many of the characteristics of Asperger's syndrome [a variant of autism]." Thanks to the consciousness-raising efforts of people like Temple Grandin, autistic people are organizing online, fighting the stigma associated with the disorder.

Since my father's death I have wondered whether he, like Rupert Isaacson, suffered a childhood affliction. A form of Asperger's that he did his best to keep hidden? His father was drafted into the Kaiser's war (WWI) and his mother, overwhelmed with keeping the farm going and feeding six children the oldest of whom was fourteen and the youngest barely nine, succumbed to tuberculosis. When the father returned, he married again and begat more children. To make room for the young ones, the older children were given away as "apprentices," in those days of post-war deprivation a type of slavery. My father's youth seems to have been a succession of dark days. He married at thirty-five, soon to be drafted into another war, WWII. Before and during that war he lost all his brothers. His sister Anna, the youngest of the motherless siblings, is the only one who lived, as he did, past eighty.

My mother, too, had lost her mother in her teens. Even earlier, when she was yet a toddler, her father lost his life in the war that claimed my dad's father's and, indirectly, his mother's. I remember my mother as anxious and stressed-out. When something bothered her, which was often, she would rant at my father, who then retreated to his workspace, his bake house. She never followed him there, only but unleashed her fury on her children. At fourteen I ran away from home to have my braids cut off, for my mother used to yank me around mercilessly by those braids. Did my father not understand the consequences of his withdrawal, his lack of conversation hurting the entire family? The four of us, their children, found it impossible to love our parents. Our mother died soon after she turned forty. Today I wish someone had loved these beleaguered individuals, my parents, back when there might have been a chance of amelioration: the kind of chance Rupert Isaacson offered his son. Young-adulthood might have turned less lethal for my unfortunate brothers. As the oldest and sole survivor, I miss them more than words can convey. A handful of photos from those days are posted on my website's Picture Gallery.

In order to become trusting, empathetic adults, we must experience empathetic love as babies-even before that, in the mother's womb, write the authors of Born for Love. An individual whose childhood was traumatic might overcome the handicap; more often, however, emotionally deprived children grow into stunted adults. My husband and I were two such people. One of our sons informed me while still in college that he had no wish to father a child; he wanted to spare his offspring a childhood like the one he suffered. Born for Love, while assessing without sentimentality the pitfalls of adverse childhoods, nonetheless offers cautious hopes. As we become adult, we can comprehend empathy intellectually, via perspective-taking, if not as emotion, and practice thus. You'll find more of its authors' observations in a later write-up. The more I see of life, the more I am convinced that there isn't an individual alive who hasn't experienced some trauma, if not in childhood then later in life. Temple Grandin's conviction, which I second, holds that our relationships with animals help make us human--even animals raised for consumption. My son keeps a herd of beef cattle as a side business and I regularly volunteer for certain feeding and watering routines. And, yes, for processing the cows Walter uses a shute of the kind designed by Temple Grandin.

In conclusion, a snapshot from my Tennessee days with four Nashville friends and helpers at a restaurant lunch. I'm the person in blue. 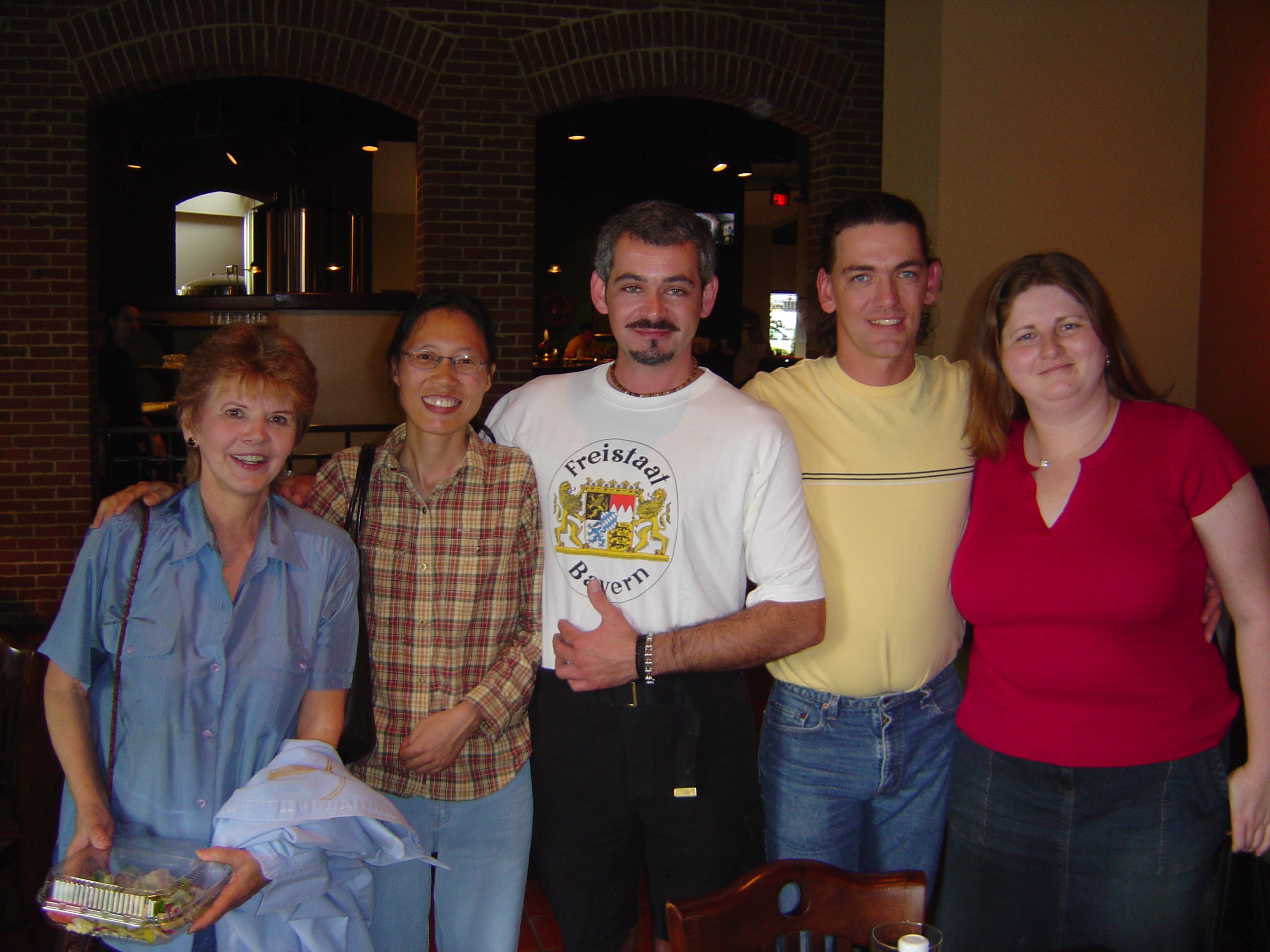 Tags: "sketches from my life" "adverse childhood" "horses and autism"
« Back to posts