Posted by Edith Cook on Saturday, August 20, 2011 Under: Reading Life 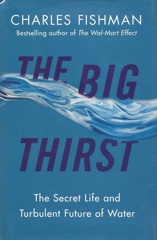 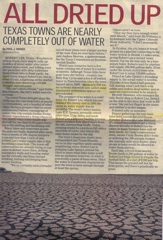 Texas is in the midst of an unprecedented drought: nearly 94% of the state is under “extreme” weather conditions that, climatologists predict, will continue into the next ten months if not longer. At this point, to speak of “drought” may be misleading: what’s happening looks like a shift in rainfall patterns that’s part of climate change and global warming. Most Texans, including the state’s governor, deride the possibility and ignore the warning signs, turning to prayer meetings instead, and, in Governor Rick Perry’s case, claiming that global warming is an “unproven theory.”

Texans are not alone. Charles Fishman in his 2011 The Great Thirst documents monumental stupidity in water planning and climate-change adaptation, not only in various parts of the United States—Atlanta, Georgia, being a case in point—but also in other countries. His discussion of Hurricane Ike’s devastation of Galveston, TX, shows the disaster that lurks when planners refuse to look unflinchingly at the foreseeable future. Ike, a Category 4 monster, didn’t get much attention, writes Fishman, because other bad news trumped its mid-September landfall in 2008: that month, “the sub-prime mortgage crisis nearly unraveled the world’s economy.” Unlike the fallout from Hurricane Andrews and Hurricane Katrina, the plight of Galveston residents remained obscure on the national scene—until Fishman brought it to attention.

We need to revamp our attitudes about water, urges Fishman: locally, nationally, even globally. Take, for example, our problematical views regarding tap water. Today, thanks to the campaigns of bottled-water companies, many of us look upon tap water with suspicion. In April 2008, Senator Arlen Specter told an audience of college students that, so as to be “extra sure,” he drinks bottled water whenever possible. “I don’t like drinking tap water because I don’t trust tap water,” Fishman quotes Specter as saying, a flat-out absurdity to Fishman: “It would be like Specter . . . saying that he avoids bridges because he “doesn’t trust the bridge building system in the United States.” Fishman documents that the tap water in the US is one of the safest resources around, undergoing rigorous testing and safeguarding, while bottled water “isn’t regulated with anything like the scrutiny and care that tape water is. The chance that there’s something kinky about your drink of water is actually greater with a commercially packaged bottle of water than with a glass of tap water,” he writes, adding an extensive footnote documenting the finding.

Since bottled water—specifically, FIJI Water—has been photographed in the hands of President Obama and his family, Fishman goes into some detail regarding FIJI. The water comes from an aquifer on the north coast of Fiji’s main island where in a “state-of-the-art factory” it finds its way into “more than a million bottles of water a day.” Those bottles then make it “by truck, cargo container, ship, and even the Panama Canal, to the hippest clubs in Los Angeles (5,520 miles from Fiji) and Miami Beach (7,480 miles from Fiji). Meanwhile, more than half the residents of the nation of Fiji do not themselves have safe, reliable drinking water” (my emphasis).

The catastrophic cost of living without safe, reliable drinking water is demonstrated in Fishman’s chapter on the many water crises in India, “Where Water is Worshipped but Gets no Respect,” as Fishman titles the chapter. That cost affects all of us, and I found the chapter so upsetting, I had to put down the book several times. Like in Texas, many people in India shape their attitudes via religious (albeit non-Christian) beliefs. More of it in my next post.